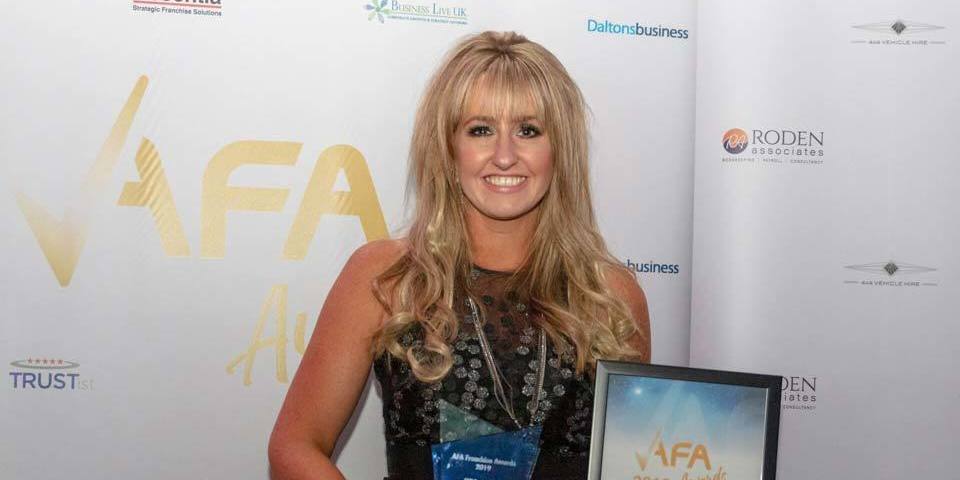 The it'seeze franchise Wins Gold At The AFA Awards 2019!

We're delighted to announce that the it'seeze franchise marketing team won the Gold Award for 'Outstanding Franchise Marketing' at the inaugural AFA (Approved Franchise Association) Awards, which were held in Milton Keynes on Thursday 19th September.
Amy Cross-Webber, Marketing Manager, attended the awards on behalf of the it'seeze franchise team, and was accompanied by local franchisees Steve Axtell (it'seeze Northampton) and Andy Axtell (it'seeze Milton Keynes).
This black-tie event - which celebrated excellence in the franchise sector - was designed to bring together the best franchisors, franchisees, and suppliers in the industry to network and share their business successes.
There were 9 award categories in total, with the Outstanding Franchise Marketing Award being awarded to the franchise that could "demonstrate excellence in marketing activities both to potential franchisees and to consumers", through online and offline activities including "website, social media, online campaigns, print media, events, and public relations".

On collecting the award, Amy said that:
"it's an honour to have been presented with this prestigious award, which highlights all the hard work the it'seeze franchise marketing team put in to supporting our ever-growing franchise network at both a national and a regional level."
This award was fierce with competition, so what made the it'seeze franchise stand out from the crowd? Sarah Canny, Business Development Manager at the AFA, had the following to say:
"The it'seeze franchise showed exceptional content in both statistics and figures, as well as detailed explanations. Time and effort clearly went into this application, knowing where they stood in relation to their direct competitors as well as to industry averages. The future plans included in the application were well thought out and explained methodically with steps included on how to achieve their goals. Their reviews and testimonials also spoke for themselves with high scores and positive comments across the board. Keep up the good work, it'seeze - we hope to see you entering more categories next year!”
If you're looking to partner with an award-winning web design franchise that can set you up for business success, we'd love to hear from you.
Get in touch with us to arrange a discovery day at our Head Office
[option no longer available: centerDivider]
Or call our Franchise Development Manager Alex Brook on 01803 401 060 or 07588 903464
to find out more about joining our franchise and working alongside our accomplished marketing team.
Tagged as: awards
Share this post:
Our site uses cookies, including for advertising personalisation. For more information, see our cookie policy. Accept cookies and close
Reject cookies Manage settings